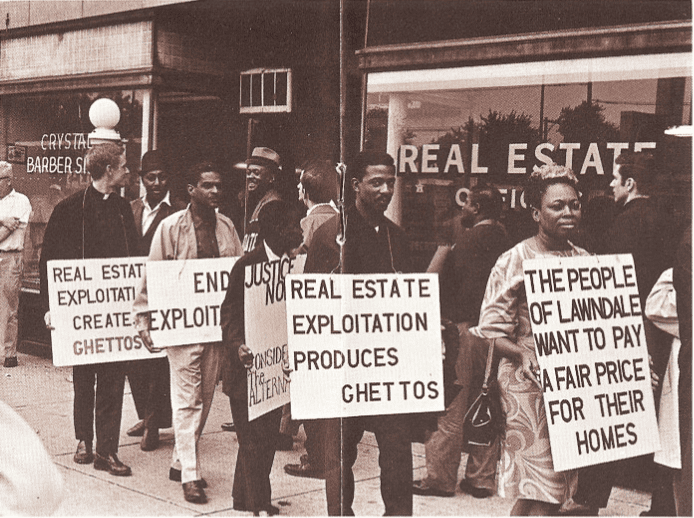 My friend Jack Macnamara died September 5th last year. For most of his life, he taught about the evil genius of a handful of predatory real-estate men in 1960’s Chicago who tricked many white families into selling them their houses below market value because the Blacks were coming. These houses were then leased to Black families through corrupt rent-to-own “contracts” at inflated prices. The families often ended up being kicked out, having dumped all of their savings into the houses, unaware that the contracts never entitled them to any protection. Thus a route to Black intergenerational wealth died in its infancy as white flight continued out of Chicago. The process was halted in 1970 through the committed efforts of the Contract Buyers League and men like Jack, but has been re-born today and through much more sophisticated means.

That history along with my knowledge and personal experiences is why the fashionable “BLM” signs (a day late and a dollar short) in Church windows and storefronts don’t do it for me. I wonder how many “good” Catholics fled Chicago or threw bricks at Dr. King when he came there to fight for fair housing. I cynically ponder how many hip folks in gentrified Brooklyn (who just love Biggie) screech “Black Lives Matter” but also go to marches to resist public school rezoning that would desegregate their childrens’ schools or claim that it is, of course, “about class not race.” The teacher in me doubts that “liberal” Catholic, white-America, while railing against the far-right, will ever accept that their votes just as easily maintain the machinery that systematically subjugates so many and is just as far from the Kingdom as Trump supporters are.

Jack spent the last years of his life unpaid at Loyola Chicago, fighting against and teaching about contract buying (he semi-joked he would soon need to drive an Uber, even as he carried around his mini-ventilator). He was the unacceptable prophet because he liked action over slogans and humble encounter over sound-bites. He by no means cared if you thought he was or wasn’t “woke.” Perhaps that was Jack’s biggest flaw – that he didn’t like to self-promote, preferring to use his privilege to amplify others who he believed deserved the limelight over him.

Fifty years ago, as a young Jesuit, Jack was given permission by then-Provincial Fr. Robert F. Havernak, SJ, to live among the organized, Black “contract buyers” on Chicago’s westside. Partly from Jack’s connection, Havernak eventually visited and “fell in love,” returning many times, later approving the necessary, requested $100,000 for the contract buyers’ “appeal bond fund” to conduct their famous rent strike. On a visit of all American provincials to Chicago, Havernak then invited all the Fathers to a spaghetti dinner served on paper plates at the home of one of the local leaders; the ten [so-called] “conservative” provincials surprisingly accepted. After the dinner and meeting, those same provincials risked another necessary $150,000 (not adjusted for inflation) of Jesuit funds.

While princes of the church were blessing bombs en route to Vietnam, people like Jack were working for the kingdom at the risk of their reputations (which prophets don’t care about anyway). Pedro Arrupe himself, another prophet, no doubt gladdened by the whisper of a response to his 1967 letter on anti-racism (which was virtually ignored by the American Jesuits), wrote of his admiration for what he heard happened: “no words of praise which I could pen adequately express my admiration for the spirit of Christian charity which impels the Chicago Province to jeopardize its own possessions in order to win for others their human rights.” I take consolation in the fact that a prophet like Jack can finally rest now and that his life may be a consoling and uncomfortable “stumbling block” for when we’re not doing what we need to do.