Justice for Earth, Peace for Humans 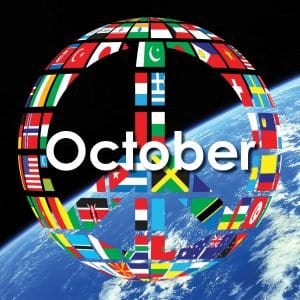 “The leadership of religion that created the great civilizations of the past is now called upon to create a new type of civilization, one that will be integral with the ever-renewing transformation of the natural world.” – Thomas Berry, C.P.

This kind of cosmological awareness is just beginning to come into consciousness within our Western human community. On one hand it is a fragile consciousness in that it is emerging within societies that are highly practiced in consumption, individualism, and making war, but are neophytes in the art of sustainable living, inter-connectedness, and making peace. On the other hand it is a strong and powerful consciousness because it carries hope for the next generations and for the future of life’s vitality on our dear Earth.

We have almost abandoned the image of Earth as the center of our Universe but we continue to embrace the antiquated image of the human as the center of everything. True, we humans are “made in the image of God” but all of creation images God and carries the divine presence and purpose. Each and every being in our Universe has its own voice that speaks of the Ultimate Mystery out of which it came and within which it exists.

True, we humans have a preeminent place in the community of life. As a species which possesses reflective consciousness we are definitely important. We are, according to writer Loren Eiseley, “a star’s way of knowing itself.” We are not, however, the be-all and end-all of the evolutionary process. We are not at the top of some hierarchical pyramid of creation. In fact, to the extent that we separate ourselves from the inter-connectedness of the natural world, to that extent we are in trouble and Earth as well.

Is it possible for us, women and men of faith, to focus our meditation upon the bond that exists between Earth and its humans? It is no accident that we are living at the beginning of the 21st century. It is time to act. We can build a human society that is more truly human and that is radically participative in the dynamics of Earth.

It is not yet too late for Earth and for its humans!