American Jesuits in the Philippines: A Century of Collaboration and Friendship 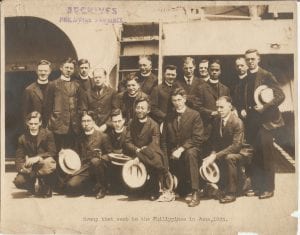 July 21, 2020 – In 1920, Pope Benedict XV asked the Society of Jesus to care for the people in the areas around Bombay, India. Fr. Joseph Rockwell, SJ, provincial of the Maryland-New York Province (which also included New England) asked for volunteers. The province, which was founded in 1879, had reached the point where it had enough men and resources to start mission work around the world. Ten Jesuits readily responded to this call.

While the men were preparing their paperwork for India, they ran into problems with getting visas from the British government. Instead of waiting, Father General Wlodimir Ledóchowski, SJ, directed the American Jesuits to go to the Philippines, where Jesuits from Spain were working. Those Spanish Jesuits would go on to serve in India. This arrangement proved to be a better fit. The Philippines was a United States colony at that time, meaning that English was prevalent enough for American Jesuits to start working effectively right away. The following year, 22 Jesuits from the Maryland-New York Province finally arrived, eager to serve the people of the Philippines. 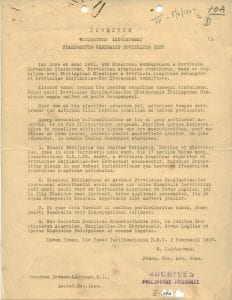 “On the eve of becoming again a unified east coast province, this was an opportunity to visit the site of the mission,” said Fr. Cecero, “and to gather with some of the American Jesuits who have been there for many years, some of them right after World War II.”

Currently there are 10 American Jesuits from the New York Province still in the Philippines. This includes the socius of the Philippine Province, Fr. William Abbott, SJ. “Obviously, those who stayed did not find continuing work here a problem, and have certainly made significant contributions by staying on,” said Fr. Abbott.

The Philippines became its own Jesuit province on February 3, 1958. In the time since becoming an independent province, the Society of Jesus in the Philippines has flourished. The province is home to 238 Jesuits as well as numerous schools and works. One of the most prominent schools is the Ateneo de Manilla, which can educate students from pre-kindergarten through their doctorate. At 205 acres, the campus of the Ateneo is nearly twice the size of Georgetown University. “The Philippines is really the major center for the Asia- Pacific region,” said Fr. Cecero. This is due in part to its status as the home of the Jesuit Conference of Asia Pacific, also known as JCAP.

The Jesuit conferences help Jesuit provinces further their collaboration efforts and international work. JCAP is one of the six conferences in the world, each made up of multiple provinces. In addition to the Philippines, the Australian, Chinese, Korean and Indonesian are just a few of the provinces that make up JCAP. The conference also works with Jesuit communities that are not full provinces.

“Another reason for my visit was to continue to form collaborative ties with JCAP in the service of our mission in Micronesia,” said Fr. Cecero. While the USA Northeast Province no longer works in the Philippines in any official capacity, it does have Jesuits and apostolates located in the Pacific. As the name suggests, the Jesuit community in Micronesia, is spread throughout the pacific islands of Micronesia and also includes Guam and Fiji. They staff two schools and provide pastoral care to the people of those islands.

Despite being part of the USA Northeast Province, these Jesuits and works in Micronesia are much closer to the Philippine Province geographically. Most of the Micronesian-born Jesuits have done some of their formation in the Philippines. “For a Micronesian, it makes more sense for him to study there because that’s the region of the world that he’s most likely to minister in,” said Fr. Cecero.

Additionally, Xavier Micronesia, the Jesuit high school located on the island of Chuuk, has benefitted from its proximity to the Philippines. This has mainly come in the form of Jesuit-educated lay teachers and administrators from the Philippines. “They were directed to Xavier by aging New York Jesuits at the schools in the Philippines,” said Fr. Tom Benz, SJ, superior of the Jesuits in Micronesia. “They’ve made significant contributions to Xavier and have been working here for the better part of the past 10 years.”

One of those Jesuit-educated Filipinos, Rovan Agad, is the current dean of students at Xavier Micronesia. Rovan has taken on numerous roles at the school, teaching algebra, geometry, trigonometry, and visual arts as well as serving as a basketball coach. While at Xavier, he has been able to help continue the mission of providing a Jesuit education to the people of the Pacific. “Throughout my years as an educator, I have seen what impact Xavier does to its local community here in Chuuk and beyond,” said Rovan. “Just this school year, I had a co-teacher who was once my student when I came here years ago. Now she’s an inspiration to the youth of Micronesia.”

Fr. Cecero’s trip provided him with an opportunity to visit the novitiate in the Philippines. Unlike in the United States, where novitiates are usually used by only one province (or provinces in the process of unifying), the novitiate in the Philippine Province serves novices from several of the regions in JCAP. This means Jesuits from the Philippine Province, the Japan Province, the Chinese Province, and the Malaysia-Singapore Region learn, eat and live together. “It’s a very dynamic kind of place in terms of formation, having more international and diverse formation programs,” said Fr. Cecero of his visit to the novitiate.

“Many of us come from distinctively different cultures, but the challenges make us more creative in our response,” explains Fr. Christopher Dumadag, SJ, one of the two directors at the novitiate. Fr. Dumadag himself has a connection to the East Coast provinces since he completed his Master’s in Theology at Loyola University Maryland. This model for a novitiate has only been in place for the last few years, and they are always looking for ways to improve it. “The whole noviceship rationale is about how to give a better, if not the best, formation the novice could undergo,” said Fr. Dumadag.

While the Philippines has been its own province for more than 60 years, its relationship with the East Coast Jesuit provinces remains strong. Perhaps part of the reason for this can be best explained by one of the men who stayed to work in the Philippines. “We saw the work we were doing as valuable and consider the Philippine Province as home,” said Fr. Abbott. “These Jesuits love the people and have found it very rewarding to be able to work and be with them for so many years.”