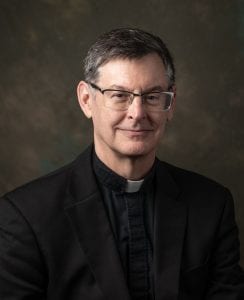 November 30, 2020 — Fr. Brian G. Paulson, SJ, has been appointed by Fr. Arturo Sosa, SJ, Superior General of the Society of Jesus, as the next president of the Jesuit Conference of Canada and the United States.

Fr. Paulson currently serves as provincial of the USA Midwest Province and will assume his new position in 2021. An exact date for the transition has not been set. Fr. Paulson will succeed Fr. Timothy Kesicki, SJ, who has served as president of the Jesuit Conference since 2014.

“Fr. Paulson has many gifts,” Fr. Sosa said in making the appointment. “Deeply in love with the Lord and the Church, he is zealous in proclaiming the Gospel. He is intelligent, strategic, energetic and outgoing. His leadership is bold, even audacious. He is confident but also collaborative, decisive but also discerning, eager to speak but also ready to listen.”

Headquartered in Washington, D.C., the Jesuit Conference promotes common goals and coordinates common projects for the Jesuit provinces of Canada and the United States.  As Conference president, Fr. Paulson will serve as part of the Superior General’s extended council and represent the Society in many church and civic venues. He will also represent the Conference internationally and serve as the religious superior of the Boston College School of Theology and Ministry and the Jesuit School of Theology of Santa Clara University in Berkeley, California. 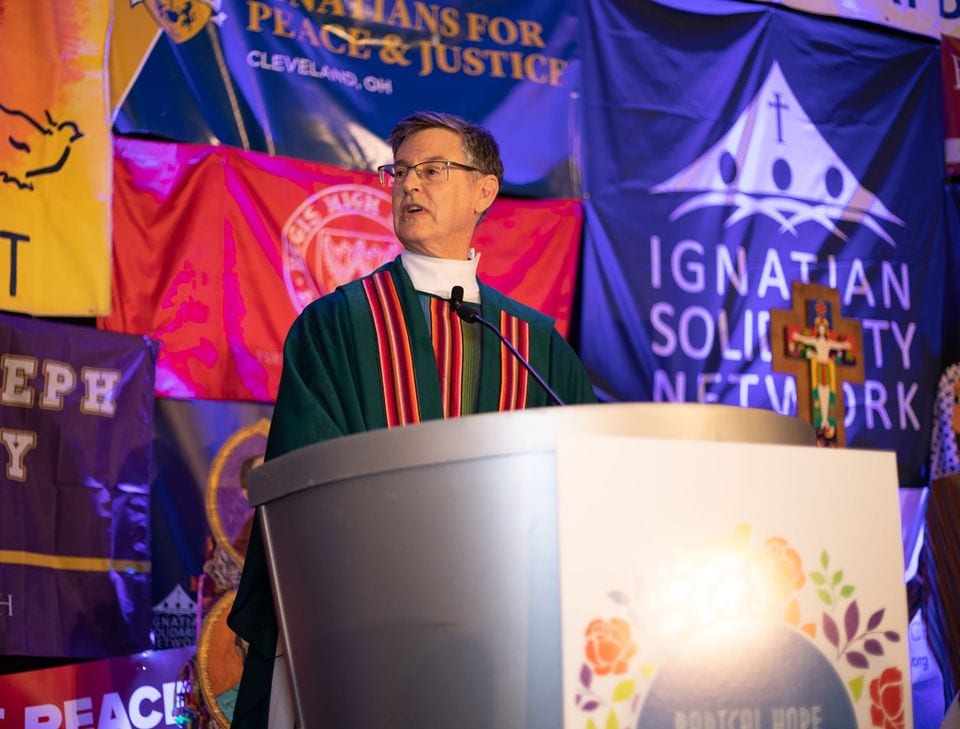 Fr. Paulson celebrating the closing liturgy of the 2019 Ignatian Family Teach-In for Justice in Washington, D.C.

“I am humbled to be entrusted with this responsibility to work with the five provincials in Canada and the USA to advance our shared responsibility for the global Jesuit mission — we are stronger together,” said Fr. Paulson.

Named provincial of the Chicago-Detroit Province in 2013, Fr. Paulson led a unification process with the Wisconsin Province, which joined together to form the USA Midwest Province in 2017. During his tenure in the Midwest, Fr. Paulson has been a leader among the provincials in his work toward racial justice and healing in partnership with the Descendants of those enslaved by the Jesuits. He has also been a key voice on topics related to the promotion of vocations and Jesuit formation — the training of men who enter the Society.

“I am grateful to Fr. General for appointing Fr. Paulson to be the next president of the Jesuit Conference,” said Fr. Kesicki, who will continue to serve as Conference president until Fr. Paulson’s appointment takes effect. “I have known Brian for over 30 years and am excited to see him take on this role on behalf of the Society. Brian has a great care for the worldwide Society of Jesus and I know that he will work well the with the five other Conference presidents in helping Fr. General with his governance of the Society. I am confident that he and the new provincials of the Jesuit Conference of Canada and the United States will continue the noble mission of the Society as we live out the Universal Apostolic Preferences.” 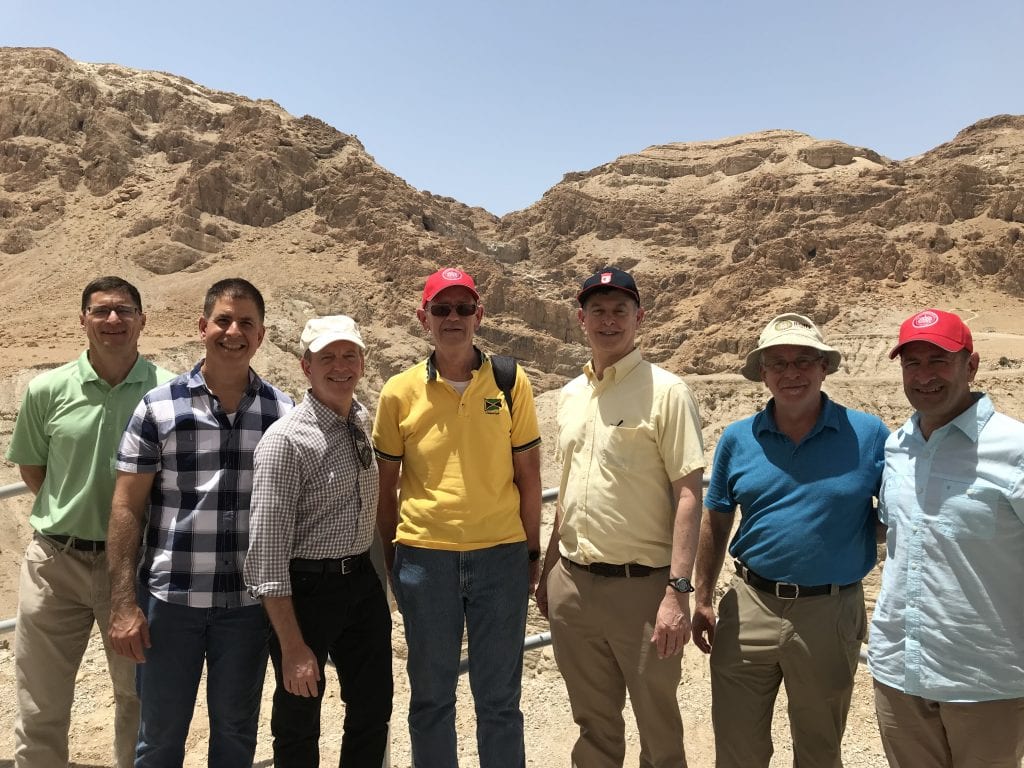 Fr. Paulson (fifth from left) with fellow Jesuit provincials and Fr. Kesicki (far right) in the Holy Land in 2019

Fr. Paulson has served in a variety of leadership positions as a Jesuit. From 1993 to 1998 he was the vocations director for the Chicago Province (now the USA Midwest Province). After 11 years as president of Saint Ignatius College Prep in Chicago (1999 to 2010), he was named rector of the Loyola University Jesuit Community in Chicago before becoming provincial of the Chicago-Detroit Province (now the USA Midwest Province). 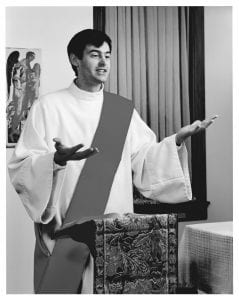 Fr. Paulson entered the Society of Jesus at Loyola House Jesuit Novitiate in Berkley, Michigan, on September 12, 1981. He was ordained to the priesthood on June 13, 1992, and professed final vows on March 25, 2001. A native of Waukegan, Illinois, he attended St. Anastasia Grade School and Campion Jesuit High School in Prairie du Chien, Wisconsin. When the school closed in 1975, he finished his high school education at Loyola Academy in Wilmette, Illinois, and went on to earn a bachelor’s degree in international economics from Georgetown University’s School of Foreign Service.

After graduating from Georgetown, he entered the Society. “Anything else I thought about doing in life would have felt like I was playing house or running away,” Fr. Paulson says of his vocation. “I feel like I’ve been blessed from a very young age of a lively sense of who God is. God’s presence has been very real and accessible to me, so if I could help share that gift with other people, I would love to be able to do that.”

Since joining the Jesuits he has earned a master’s degree in political philosophy from Loyola University Chicago, a bachelor of sacred theology degree (STB) from Centre Sèvres in Paris, a master’s degree in education from the Harvard Graduate School of Education, and a licentiate in sacred theology (STL) from the Weston Jesuit School of Theology. He has served on the board of trustees at Brebeuf Jesuit Preparatory School, Christ the King Jesuit College Preparatory School, the Lumen Christi Institute of Chicago, and was a trustee associate at Boston College after 16 years of service on the board of trustees. 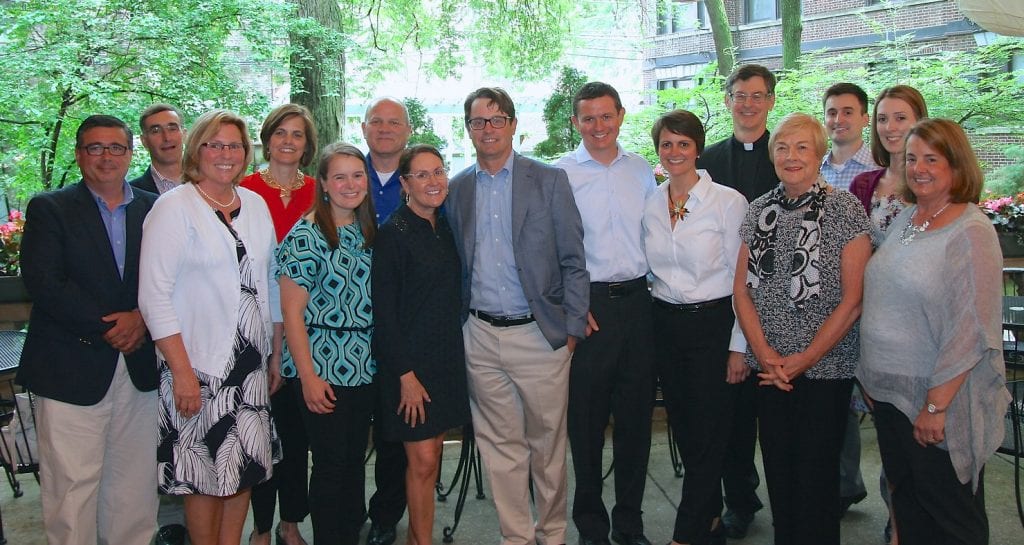 Fr. Paulson with his family