Meet Our Jesuits Getting Ordained to the Priesthood

Click here to watch the Live Ordination Mass on August 8 at 10:30 am from the Saint Joseph’s University Chapel.

Click here to watch the Live First Vows Mass for novices on August 7 at 4:00 pm at the Cathedral in Syracuse.

In a typical year, Jesuit provinces across the country celebrate ordinations in early June. This, however, has been anything but a typical year. The planned ordinations for the Maryland and USA Northeast Provinces in June at Fordham University were postponed due to the coronavirus pandemic. They have been rescheduled for August 8, 2020, at Saint Joseph’s University, with one of our Jesuits, James Ferus, SJ, being ordained on August 1 with the seminarians of the Archdiocese of Boston. Factors that contributed to these fluctuating logistics included accommodating vulnerable family members and adhering to possible social distancing requirements still in effect. It has been a challenging few months leading up to this most important day in the lives of these men in formation who have dedicated themselves to serving God and others. Please pray for them. 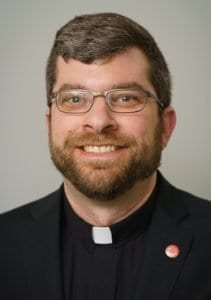 Jason Downer, S.J., was born and raised in Rochester, New York. In addition to his parents, Jason has two older sisters who are married and have families of their own. He is a proud uncle of five nieces and nephews. He first met the Jesuits at McQuaid Jesuit High School and then continued to be educated by them at Canisius College in Buffalo, New York. Jason did a year of service with Mercy Volunteer Corps after undergrad and before starting grad school at Canisius College. After graduate school, he worked at Fairfield University in Fairfield, Connecticut, in student affairs for a few years. Jason loved being a part of the Jesuit mission and Ignatian spirituality, and so in 2008 began a two-year process of discernment. He entered the Jesuits in 2010 and has had a variety of experiences since then, including studying Spanish in Bolivia and Miami and being a chaplain at the Cook County Temporary Juvenile Detention Center. Jason has been blessed to work with young adults in campus ministry at Saint Peter’s University in Jersey City, New Jersey, and to be trained as a spiritual director and accompany people of various ages in the 19th annotation retreat. After ordination, Jason will do a pastoral year in Pohnpei, Micronesia. 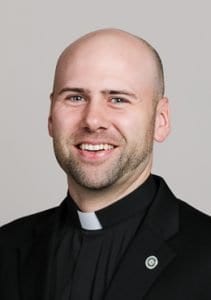 James Ferus, S.J., was born and raised in the coastal city of New Bedford, Massachusetts, the only child of Nancy and the late Paul Ferus. James’ Catholic faith was nourished by his family, parochial schooling, and years as an altar server. While he didn’t attend a Jesuit school, his interest in studying the Bible and asking many questions of parish mentors likely suggested his future life as a Jesuit and educator. James began to seriously consider priesthood through his involvement in campus ministry while an undergraduate at Harvard, where he met many Jesuits from around the world who were studying theology nearby. Eager to continue his discernment while living a life of service, James spent two years in the Jesuit Volunteer Corps, first at Cristo Rey New York High School and then at Operation Nightwatch, a community center for the homeless, in Portland, Oregon. Once his first Jesuit spiritual director pointed out to James how much he loved his students and community, he felt Jesus nudging him to make a lifelong commitment to religious life. Since entering the novitiate in Syracuse in 2009, God has always been gracious and resourceful with James’ prayerful desires and talents. Gifted with music lessons as a boy, James taught violin to students in the Bronx while studying philosophy at Fordham and later played with the inmate choir at San Quentin State Prison while studying theology in Berkeley, California. In between, he greatly enjoyed his years in Maine teaching students and accompanying them and their families at Cheverus High School. Most recently, James served as a deacon both at San Quentin and Our Lady of Lourdes in Oakland. Next year he will continue in these ministries as he completes a Licentiate in Sacred Theology. James will celebrate Masses of thanksgiving at Fordham and his home church, St. Lawrence, Martyr. 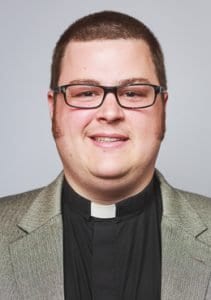 Kevin Hughes, S.J., grew up in Cherry Hill, New Jersey, with his parents and sister, where he attended his local parish grammar school. Kevin’s grandmother suggested that he consider St. Joseph’s Prep in Philadelphia for high school, which was a wise suggestion because this is where he first met the Society of Jesus. He always loved science and throughout high school aspired to do some kind of research in the field of biology. High school was a difficult time for Kevin, as it is for many, and he did not care to put much effort into developing a relationship with God. After graduating from high school, he attended La Salle University in Philadelphia where he majored in biology. During his freshman year, Kevin had an experience of God. He always struggles to adequately describe this experience, but regardless, in the moment of encounter he felt and knew that he was deeply loved by God and called to relationship. Kevin wanted to understand his experience and what it might mean to be loved and called by God, so he went back to talk with one of the Jesuits he knew and trusted from his high school, Fr. Tom Clifford, S.J. Over the next four years of undergrad he examined what it means to be loved by God and began to discern how best to make a response in love to the God who loves him. Kevin decided that he wanted to give back with a life of service to God and God’s people. By the end of his senior year, he had applied and been accepted to the novitiate, and Kevin has loved continuing his journey of discernment about how best to respond to God’s love and Christ’s call to follow him. As a Jesuit in formation, Kevin taught math and science at McQuaid Jesuit High School in Rochester, New York; did a summer immersion with fellow Jesuit scholastics in China; and earned a Master of Divinity degree from Regis College in Toronto. After ordination, Kevin will serve as parochial vicar at Our Lady of Hope Parish in Portland, Maine. 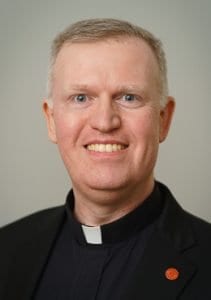 Douglas Ray, S.J., was born in Yonkers, New York, and grew up in the Bronx and Manhattan. He met the Jesuits in kindergarten at his grammar school, St. Ignatius Loyola, before attending Regis High School in New York City. Doug did his undergraduate studies at Princeton University in New Jersey, where he earned a degree in medieval history, before studying law at Harvard. He practiced securities law in New York, first at Pillsbury Winthrop Shaw Pittman LLP, and then at AXA Equitable Life Insurance. Doug began discerning a call to the priesthood soon after graduating from law school but was uncertain how to answer that call. His experience as the third generation of his family to be taught by Jesuits helped attract him to learn more about the Society. After several years of spiritual direction, he entered the novitiate in 2010. As a novice, Doug worked in campus ministry at Georgetown University in Washington, D.C. After professing his first vows, he then studied philosophy at Fordham University in the Bronx, New York. During his time at Fordham he volunteered at Cristo Rey New York High School, where he mentored students in the corporate work study program. Doug then worked at Fairfield University in Fairfield, Connecticut, where he directed the retreat program for the campus ministry department and taught business law at the Dolan School of Business. While working toward his Master of Divinity degree from the Boston College School of Theology and Ministry, Doug also served as a deacon at Saint Ignatius Loyola Church in Chestnut Hill and worked with the RCIA program there. After ordination, he will work at St. Peter Church, the Jesuit parish in Charlotte, North Carolina. He hopes to celebrate his first Mass at St. Ignatius Loyola Church in Manhattan.