On June 11, 2022, the USA East Province ordained three Jesuits to the priesthood at the Fordham University Church: Fathers Matthew D. Cortese, SJ, Sean P. Hagerty, SJ, and Sudzer Charélus, SJ (Province of Canada). From different experiences and backgrounds, these Jesuits entered the Society of Jesus and have completed a 10-year formation process that began as a discernment and a call of the Holy Spirit. They will now embark on their vocations as Jesuit priests, serving the Catholic Church and the people of God. 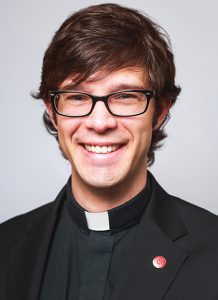 Fr. Matthew D. Cortese, S.J., is originally from Mattituck, New York, a relatively small town on the eastern end of Long Island. He is the only child of Michael and Victoria Witherspoon Cortese, a middle school science teacher and an eldercare social worker, respectively. He grew up involved in parish ministry at Sacred Heart Parish/Our Lady of Good Counsel in Mattituck and in local youth ministry. He met the Jesuits both at Inisfada, the former Jesuit retreat house on Long Island, and especially at the College of the Holy Cross in Worcester, Massachusetts. While at Holy Cross, he majored in religious studies/theology and studied abroad at Trinity College Dublin. After college, he spent a year as a Jesuit Volunteer in Seattle, Washington, working at Providence Hospice’s Transitions Program with those who were experiencing a terminal or life-limiting illness. It was this experience perhaps most of all that led him to want to pursue ministry: His clients taught him so much about suffering, love and what ultimately matters. After JVC, he earned a Master of Arts in Religion, specifically in liturgical studies, from Yale Divinity School/Institute of Sacred Music. After graduating from Yale, he entered the Society at St. Andrew Hall in Syracuse, New York. He made the Spiritual Exercises at Eastern Point Retreat House in Gloucester, Massachusetts; spent some memorable time learning Spanish in Bolivia; and worked in campus ministry and at the Appalachian Institute for a semester at the former Wheeling Jesuit University in Wheeling, West Virginia. After vows, he studied philosophy at Saint Louis University; taught philosophy and theology at Le Moyne College in Syracuse as a regent; and continued theological studies at Regis College in Toronto. After ordination to the diaconate, he spent a pastoral year working as a deacon at St. Ignatius in Chestnut Hill, Massachusetts, specifically with the parish’s Hispanic community. He will now begin his doctoral studies at Notre Dame in theology. 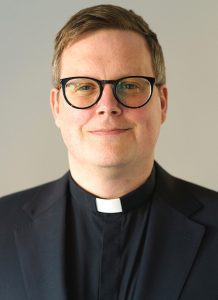 Fr. Sean P. Hagerty, S.J., was born and raised in New York, New York. He first met the Jesuits at his home parish on the Upper West Side as a child and then at Xavier High School. He went on to attend Fordham University on a ROTC scholarship and was commissioned a field artillery officer in the U.S. Army. Sean was assigned to 1st Brigade, 25th Infantry Division out of Ft. Wainwright, Alaska. There he was an active part of the Catholic community serving as a catechist at St. Nicholas Catholic Church in North Pole, Alaska. In 2008 he deployed to the Diyala Province of Iraq as the Fire Support Officer, and later Executive Officer, of A Company, 3rd Battalion, 21st Infantry. After leaving the Army as a captain in 2010, Sean worked for AB InBev as a logistics manger in New York, Tulsa and Los Angeles. In 2012, Sean joined the Society of Jesus and was sent to the novitiate in Syracuse, New York. While there he worked in jail ministry at the local county jail and served as a chaplain at Upstate University Hospital. Following first vows in 2014, Sean was missioned to Saint Louis University (SLU), where he earned a master’s degree in philosophy. While in St. Louis, he was a catechist at the College Church and a chaplain to the SLU veteran community. Following philosophy studies, Sean was missioned to Portland, Maine, to work as a theology teacher at Cheverus High School. In addition to teaching, Sean helped with several school activities and worked as a bus driver for the athletic department. In 2018, Sean began his theology studies at the Boston College School of Theology and Ministry for a Master of Divinity and a Licentiate in Sacred Theology in moral theology. His research and thesis centered around questions of just war, moral injury and the reintegration of soldiers into the Catholic community. He also served as a deacon at Our Lady of Grace in Chelsea/Everett, Massachusetts, and at St. Mary of the Assumption in Revere, Massachusetts. He will now serve as Assistant Director of Vocations and Promoter for the USA East Province.

Fr. Sudzer Charélus, S.J., (Province of Canada), was born in Verrettes, Haiti. He is from a family of four children. His father is Aléance C. Charélus, and his mother is Marie Thérèse Fabien. He grew up in Gonaives, Haiti, where he attended Ecole Notre Dame de la Visitation and College Diocésain Saint Paul. At the parish, Notre Dame de la Visitation, he was an altar boy and was involved in various youth activities. He met the Jesuits through his cousin, Charélus Marcel, who is also a Jesuit. He entered the Society on August 9, 2009. After completing his two years of novitiate in Haiti (2010-2012), which permitted him to confirm his calling to serve the Lord in the Society, he was missioned to the Dominican Republic to do his philosophy studies, where he lived for four years (2012-2016). After his philosophy studies, he went back to Haiti to do his regency at the Spiritual Center in Port-au-Prince, Haiti, where he served as minister of the community. During his regency, he was called to teach philosophy at Collège Saint Ignace and at the Grand Séminaire Notre Dame in Port-au-Prince. After his regency, he was sent to Abidjan, Ivory Coast, to do his first cycle of theology at the Institut de Théologie de la Compagnie de Jésus. Currently, he is working on a Licentiate in Sacred Theology in moral theology at the Boston College School of Theology and Ministry.