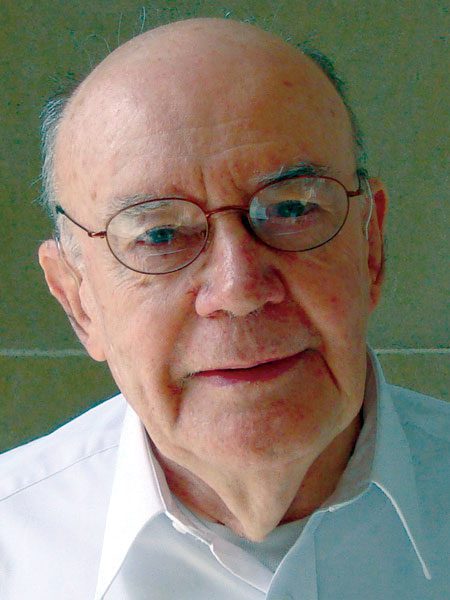 March 10, 2022 – Fr. Frederick G. McLeod, SJ, was born in Dorchester, Mass., on Feb. 22, 1932, the oldest and last surviving of six siblings to whom he remained close throughout his life. He was preceded in death by his parents, Walter B. and Evelyn McGahey McLeod, as well as by his brothers, William, Robert, and Richard, and his sisters Marjorie Costello and Carol Stanley. He is survived by two sisters-in-law, Kathie McLeod and Jane McLeod, and 13 nieces and nephews.

He began his active ministry at Baghdad College in Iraq, where he served 1956-59. He returned to Baghdad as a young priest but was soon forced out along with the other foreign-born Jesuits. He then served as the rector of the Jesuit Collegian Community in Boston from its beginning to its end, 1969-73.

Fr. McLeod earned a Bachelor of Arts and a master’s degree in philosophy and classics from Boston College. He received his Ph.D. in theology from the Pontifical Oriental Institute in Rome in 1973.

In 1973, Fr. McLeod was assigned to Saint Louis University as a professor of theological studies. He continued in this role until 2006, more than 30 years. From 2006 until his death, he wrote about theology.

Fr. McLeod enjoyed teaching, but he relished writing even more. He eagerly anticipated his occasional sabbaticals, both for the time and space they provided him for writing, and for the opportunities they gave him to reconnect with his New England roots and his family. Even as his health weakened, he continued to write a bit each day.

His quiet wisdom, patience and good humor were gifts he freely gave to his community, family and friends until the very end.

Fr. McLeod was called to eternal life on March 7, 2022, at the Fusz Pavilion of Jesuit Hall in St. Louis, Missouri. He was 90 years old, a Jesuit for 72 years and a priest for almost 60 years.

A Mass Celebrating the Life of Fr. McLeod will be held on Tues., March 15, 2022 at 4:30 pm CDT Jesuit Hall, Saint Louis, Missouri. Click here to view the livestream at that time.