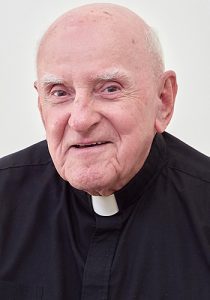 Fr. John (Jack) Donohue, SJ, was born in Worcester, MA in 1926, the only boy, the third of five children. His father, Florence Timothy, was a grocer, and his mother, Helen, a homemaker.

After Catholic grammar school and high school, he went on to the College of the Holy Cross and the Navy. From 1943 – 1946, he was commissioned as an Ensign and served on the destroyer Robert K. Huntington as Gunnery Officer in the Pacific.

He entered the novitiate at Shadowbrook in Lenox, MA in 1948. He received a Master’s in Philosophy and a Licentiate in Sacred Theology from Weston College, Weston, MA, where he was also ordained a priest on June 13, 1959. He went on to study Arabic Language in Iraq at the St. Joseph Residence, Baghdad. He earned a Ph.D. from Harvard University in Arab History – Medieval Arabic History – a period that no one was interested in at the time when an Iranian Shiite dynasty took over what is now Iraq and Iran for a full century. A topic that is very pertinent today.

Before Saddam Hussein, long before American troops landed on the ground, five Holy Cross Jesuits arrived in Iraq as part of the Society of Jesus’ global mission. Fr. Donohue was one of them.

In 1931, Pope Pius XI, responding to requests from the Catholic bishops of Iraq, asked the Society of Jesus to open a secondary school for boys in Baghdad. Ultimately, the Jesuits of the New England Province were assigned this mission, and significant numbers of Jesuits went to Baghdad between 1932 and 1969.

They established Baghdad College on a 25-acre campus, which included a library, laboratories, and a chapel, in addition to academic buildings. In 1956, they established another (and coeducational) school in Baghdad, Al-Hikma University.

Fr. Donohue served as Superior of the Iraq Mission until the Jesuits were expelled in 1969.

He later returned to the Middle East, to Beirut, Lebanon where he became Superior of the region and Director of CEMAM (Center for the Study of the Modern Arab World) from 1971 – 2007. During this period, he had many books and essays published.

Fr. Donohue epitomized far more than the meeting of East and West. He was so much at home in Baghdad and Beirut that Lebanese and Iraqis from all hues and cries considered him very much one of their own. His scholarship is one of a kind: few if any are at ease both in classic and modern studies of their societies; but he ran a modern Middle Eastern Studies Center and wrote a book on the intellectual and political life of the 10th century “Iranian Intermezzo.”

A Festschrift published in 2007, From Beirut to Baghdad: Arab and Islamic Studies in honor of John J. Donohue, SJ, brought together amidst adverse circumstances a remarkable collection of diverse scholarship from colleagues and friends worldwide writing in Arabic, French, and English.

Fr. Donohue passed peacefully on the afternoon of July 6, 2022.