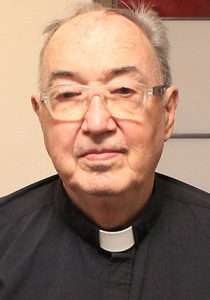 Rev. John J. Ryan, S.J., died on August 5, 2022, at Murray-Weigel Hall, Bronx, NY, where, for seven years, he had lived and fulfilled his mission of praying for the Church and the Society of Jesus.

Fr. Ryan was born in the Bronx on June 12, 1936. His parents were Michael and Mary (Clooney) Ryan. He attended Regis High School (1950-1954) and immediately upon graduation entered the Society of Jesus at St. Andrew-on-Hudson, Poughkeepsie, NY. In his second year as a novice (1955), Fr. Ryan moved to Bellarmine College in Plattsburg, NY, where he finished his Novitiate and, after first vows (July 31,1956), did his Juniorate Studies (1956-1958).

Fr. Ryan’s Study of Philosophy took place at Loyola Seminary, Shrub Oak, NY, after which he went back, now as a Scholastic Regent, to his alma mater, Regis High School, to teach Greek (1961-1964).  After Regency, he did his Theological Studies at Woodstock College in Woodstock, MD (1964-968), and was ordained to the priesthood in the Fordham University Church by Bishop John Maguire of New York on June 15, 1967.

After Tertianship at Rathfarnham Castle in Dublin, Ireland, Fr. Ryan taught Theology, Latin and Greek at Canisius High School in Buffalo, NY (1969-1980).  In 1979, Father Provincial (Vincent Cook) put out a request for volunteers to serve in our overseas missions and Fr. Ryan generously let it be known that he was available.  So, in the summer of 1980, Fr. Ryan set off for what would become a nineteen-year mission assignment to Africa. He began in Benin City, Nigeria, where he worked as a pastoral minister in St. Joseph’s Parish (1980-1982) and then as assistant Master of Novices in the Jesuit Novitiate also in Benin City (1982-1989).

Fr. Ryan left Nigeria in 1989 to serve for one year as Assistant Prefect of Spirituality in the Jesuit house of studies in Kimwenza, Zaire (now the Democratic Republic of the Congo). He returned to Lagos, Nigeria, in 1990 as Socius to the Superior of the Mission.  In 1992 Fr. Ryan became chaplain at the University of Lagos and its Teaching Hospital for the next 7 years.

In 2015, due to poor health, Fr. Ryan returned to the Bronx, where he was born and raised, to take up residence in the Province Health Care Facility at Murray-Weigel Hall on the Fordham University Campus.  In these later years, he was never more content than when puffing on a cigar or watching his beloved Yankees. After a fall and a brief illness, Fr. Ryan died quietly in his room at Murray-Weigel Hall at the age of 86.  He surely now knows true and lasting contentment close to the Jesus whose loyal companion he always tried to be.