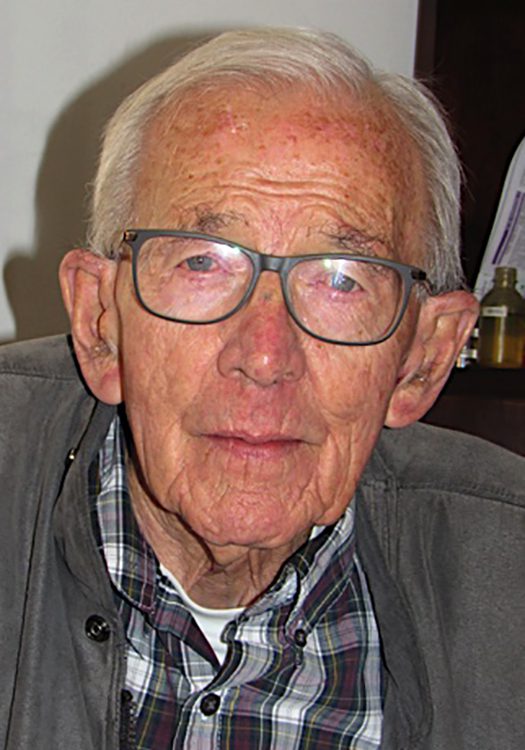 In 1943, Fr. Halligan entered Fordham Preparatory School in the Bronx. He had made up his mind to attend a Jesuit high school, and Fordham was the closest to his home. In his own words: “It was a friendly place, and we all knew each other. The whole place was ours, and we belonged.”

Fr. Halligan credited the Prep with helping him discern his calling to the priesthood. After graduating from the Prep in 1947, he entered the Society of Jesus at St Andrew on Hudson, Poughkeepsie, N.Y. After finishing his novitiate 1949, he began his juniorate. From 1951 through 1954, he worked on his philosophy studies.

In 1954, he was sent to Saint Peter’s Prep in Jersey City to teach Latin and English. After four years in that role, he left and began his theology studies at Woodstock College in Maryland. In 1961 he was ordained to the priesthood at the Fordham University Chapel in the Bronx. The following year, he completed his theology studies.

In 1962, Fr. Halligan began his tertianship. During this time, he was assigned to work in South America. In 1964, his superior asked him to travel north to the city of Quito, Ecuador, to study and report back about the street children of the capital city. He found that many of the children, some of whom were as young as five years old, were shining shoes so that they could bring money home to help their families. Some of the boys provided as much as 85% of their family income. To support them, Fr. Halligan founded el Centro del Muchacho Trabajador, the Working Boy’s Center, which provided meals, education and a place to stay for a small number of the “shoeshine boys.”

The Center was originally housed in the attic of el Colegio Gonzaga , Gonzaga Jesuit High School. Fr. Halligan began by offering the boys a warm lunch. Eleven showed up to eat the first day, and by the six-month mark, 250 boys were eating lunch at the Center daily. Over the years, the Center would help thousands upon thousands of families and individuals rise out of poverty.

The Center began to call itself a family of families, providing three meals daily on six days of the week, facilities for education, and medical and dental care to working boys and all members of their families at three sites in Quito. All children were required to attend preschool, grammar school and technical school. As part of the training program, Halligan built a strip mall near the main campus housing a restaurant, bakery, beauty shop and small-goods store, not so much as a money-making venture, but rather as site where members of the Center could get training and experience in customer service and business administration.

In 2010, Fr. Halligan was awarded the $1.2 million Opus Prize, a faith-based humanitarian award, for his work at the Working Boys’ Center, which he shared with Sr. Beatrice Chipeta, RS of Malawi. The Opus Prize is awarded by the Opus Foundation, a private, independent nonprofit group that seeks to honor “entrepreneurship, transformational leadership, faith lived each day, service to others, and respect for the dignity of the human person.” Most significantly, Opus Prize recipients exemplify the adage, “Give a person a fish; you have fed him for a day. Teach a person to fish; and you have fed him for a lifetime.”