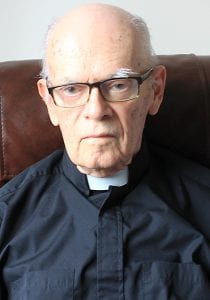 Fr. Robert H. Cousineau, SJ was born in Fall River, MA to Lucien Cousineau and Yvonne (Lagarde) Cousineau on March 12, 1929. In 1943 Bob attended Classical High School in Providence, RI until his parents moved to New York in 1946. He completed his High School education at Cathedral College High School in Brooklyn. After graduation, he entered the Society of Jesus at St. Andrew-on-Hudson on July 30, 1947; there he completed his Novitiate and Juniorate.

Fr. Cousineau then studied Theology at Woodstock College in Woodstock MD (1957-1961). He was ordained to the priesthood by Francis Cardinal Spellman on June 18, 1960 in the Fordham University Church. After completing his Theological studies, Fr. Cousineau made his Tertianship in Belgium (1961-1962).

Fr. Cousineau was an avid fisherman and an excellent cook. Each summer while he was teaching at St. Peter’s University, he would go to Canada and would always return with a 5-foot Muskie that barely fit in the back seat of his car. He’d bring it to the St. Peter’s villa house in Deal, NJ where he would prepare it and serve it to the community.

After his retirement from teaching, Fr. Cousineau went to Guernsey, WY to be Pastor of St. Anthony Church (1996-2009). On his return to New York in 2009, he resided at Loyola Hall on the Fordham Campus, while doing Pastoral Ministry in the Bronx. In 2012, Bob moved with the Loyola Community to Murray-Weigel Hall.

Fr. Cousineau’s health gradually deteriorated, and he became more and more incapacitated. He died on September 8, 2020 a few days after suffering a stroke. He devoted his life to the Society of Jesus. May he now rest in peace in the company of the Lord he sought so diligently to serve.

God Values Differences: An Eco-Reflection by Jesuit Fr. John Surette
May 1, 2021 - An eco-reflection form Fr. John Surette, SJ.
News
Planning your Estate with Winthrop Rutherfurd, Jr.,
April 26, 2021 - Mr. Winthrop Rutherfurd, Jr., a longtime friend of the Jesuits has recorded another video about Planned Giving which we are pleased to share with you. In this installment, Mr. Rutherfurd talks about IRA’s and 401(k)’s.
News
The Ignatian Year – A Worldwide Celebration
May 20, 2021 begins the Society of Jesus and the Ignatian family’s worldwide celebration of the Ignatian Year. On that date 500 years ago, Ignatius Loyola was wounded by a cannonball while defending Pamplona.
News, News Story, Spiritual, Story
Scroll to Top
X
Tweet
Share