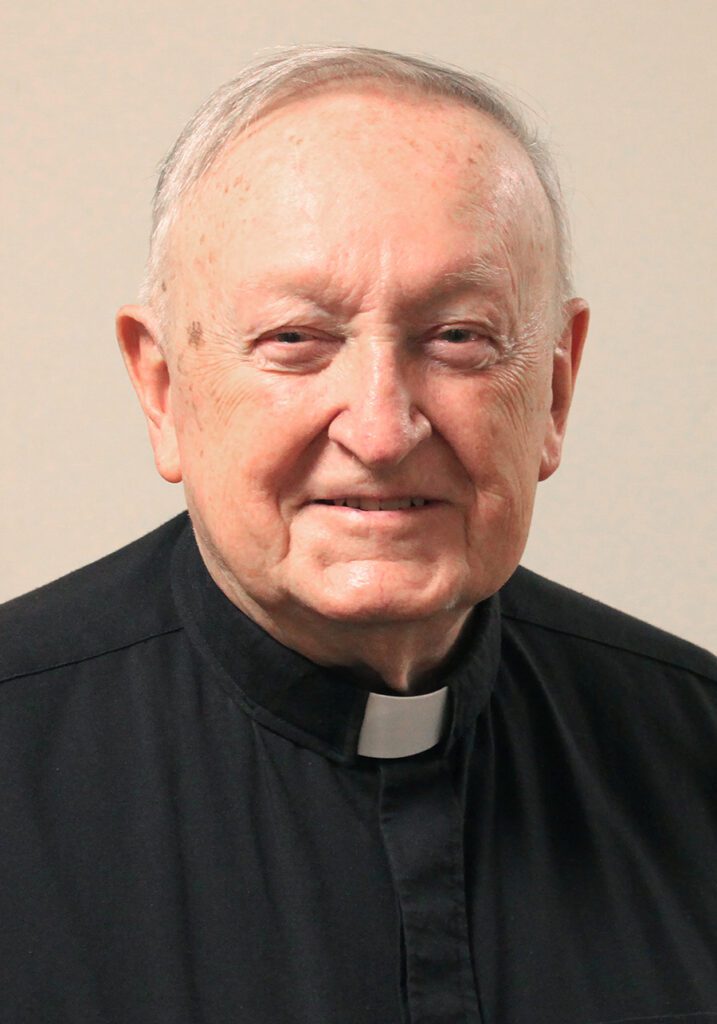 Sept. 7. 2022 – Fr. Robert V. Paskey, SJ, died peacefully at Murray-Weigel Hall in the Bronx, N.Y., in the early morning hours of Sept. 5, 2022; it was Labor Day. Fr. Paskey labored in priestly ministry all over the world, from Alaska to Madrid in Spain, to Nairobi in East Africa, from St. Ann’s Bay in Jamaica to Vietnam, and so many places in the United States.

Fr. Paskey was born in Milford, Mass., on May 29, 1935, to Vincent and Barbara (Novack) Paskey. He grew up in Milford and graduated from St. Mary’s High School there in 1952. After one year at Holy Cross College (1952-53), Fr. Paskey entered the Society of Jesus at Shadowbrook in Lenox, Mass., where after the usual two years novitiate he took his first vows. One year of Juniorate at Shadowbrook (1955-56) was followed by a second year of Juniorate at St. Andrew-on-Hudson in Poughkeepsie, N.Y.

After his year at St. Andrew’s, Fr. Paskey headed to Spring Hill College in Mobile, Alabama, to study philosophy and chemistry (1957-60), after which he went for further studies in chemistry at Boston College, Chestnut Hill, Mass. (1960-61). For his regency, Fr. Paskey taught biology, chemistry and mathematics at Cheverus High School in Portland, Maine (1961-63). Fr. Paskey then moved back to Massachusetts for his Theological Studies at Weston (1963-67). He was ordained to the priesthood on June 11, 1966, at Weston.

After ordination and a fourth year of Theology, Fr. Paskey went to Case Western Reserve University in Cleveland, Ohio, to study Social Work (1967-70) where he earned an M.S.W. degree. Fr. Paskey was quoted as having said, “My Superiors took me out of chemistry and put me into social work. I don’t know why, but it was a brilliant insight.” And it changed the trajectory of the rest of his Jesuit life.

After a year (1970-71) in Vietnam working with the Catholic Relief Services, Fr. Paskey made his tertianship in Madrid, Spain, (1971-72). He then returned to Boston to do private studies and retreat ministry. (1972-74). Fr. Paskey served as Director of Campus Ministry at Fairfield University (1974-76). From there he went to the Jesuit School of Theology at Berkeley, Calif., for a Theology update (1976-77). For the next four years Bob did retreat ministry moving around from Nairobi, Kenya, to Gonzaga Retreat Center in Gloucester, Mass., and at Campion Center in Weston, Mass.

In 1981, Fr. Paskey ventured back into the world of social work, first at Boston College (1981-85) and then at Fordham University in the Bronx (1985-88) where he served as a Consultant in the School of Social Work and Prefect of international students. During this time, he helped as a Chaplain at St. Clare’s Hospital in Manhattan, the first hospital in New York City to provide specialized care for HIV/AIDS patients. Then, after a year as pastor of Our Lady of Perpetual Help parish in St. Ann’s Bay, Jamaica (1988-89), Fr. Paskey became the Director of the Jesuit International Volunteers based in Washington, D.C. (1989-92). In this capacity, Fr. Paskey was able to visit volunteers on site in places as far flung as Nepal, Micronesia, and Belize.

A series of assignments followed: He was a fundraiser for the Christian Foundation for Children & Aging in Kansas City, Kan. (1993-94), a Pastoral Minister to the Eskimo Community in Mountain Village, Alaska (1994-95), Pastor of St. Peter’s Church in Bingham, Maine (1995-2000), followed by Pastoral Ministry in Anchorage, Alaska (2000-04). After a sabbatical at Campion Center, Fr. Paskey went to St. John the Evangelist in Concord, N.H., where he did prison and hospital ministry (2005-09). Then, after another year at Campion Center, Fr. Paskey became Chaplain at Mercy Hospital, Portland, Maine (2010-18).

In September of 2018, because of declining health, Fr. Paskey was assigned to the province health care center at Murray-Weigel Hall. He was a very serious Boston Red Sox fan, so it was at great personal risk that he moved once again to the Bronx where he endeared himself to the men of his new Jesuit Community. His assignment was to pray for the Church and the Society of Jesus which he did faithfully until his death. May he now rest in peace.