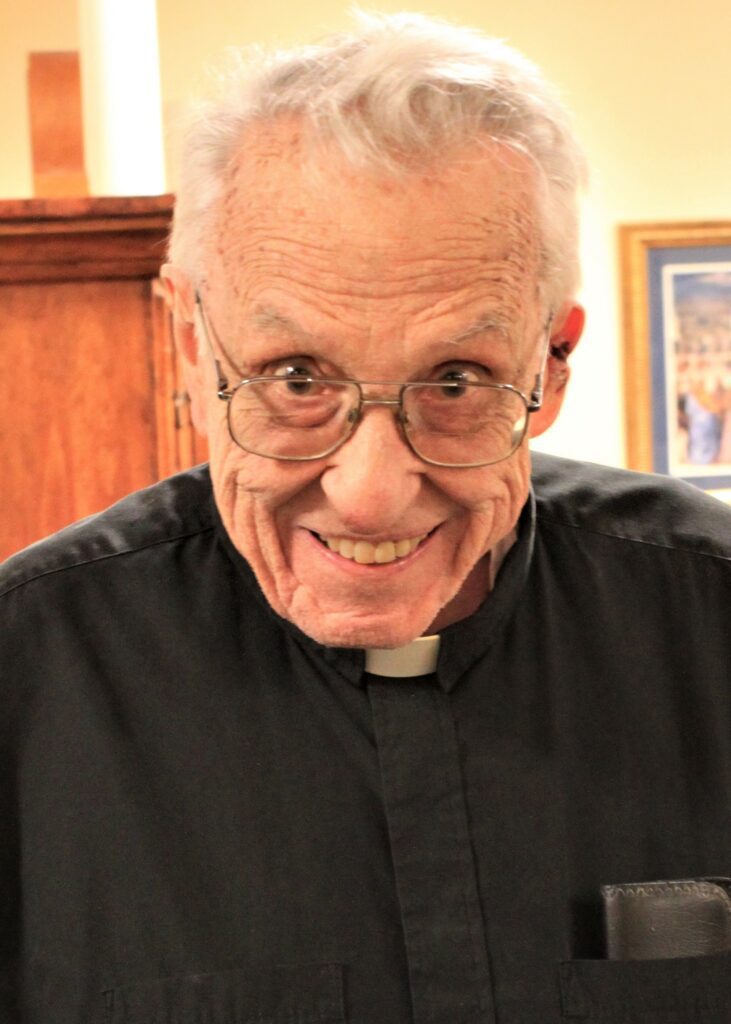 Jan. 20, 2023- Fr. Vincent McDonough, SJ, was born in New York City, the son of Vincent and Rita (Kuhn) McDonough, on September 18, 1929. The Roaring Twenties were coming to an end, it was approximately six weeks before the stock market crash which precipitated the Great Depression.

Growing up in hard times did not deter the young Vincent McDonough from his desire to pursue the call to be a priest. His preparation for the priesthood began in 1948 in the Archdiocese of New York with studies at Cathedral College Prep and St. Joseph Seminary (1948-52), followed by two years at the Pontifical Gregorian University in Rome (1952-54). But the Archdiocese of New York’s loss became the New York Province’s gain when Fr. McDonough decided he wanted to be a Jesuit, and so entered the Novitiate at St. Andrew-on-Hudson, Poughkeepsie, N.Y., in the summer of 1954. After one year at St. Andrew’s, Fr. McDonough was sent for his second year of Novitiate to Bellarmine College, Plattsburgh, N.Y., where he took his first vows on Sept. 8, 1956.

Fr. McDonough’s course of Studies was standard for those days: Philosophy at Shrub Oak, N.Y. (1956-58), and Theology at Woodstock, Md. (1961-65). Between Philosophy and Theology, Fr. McDonough did three years of regency at Canisius High School in Buffalo, N.Y., where he taught physics, English and math. His studies at Woodstock combined with courses taken at the Gregorian University before he entered the Society enabled him to leave Woodstock College with a Doctorate in Theology.

During the next 15 years Fr. McDonough had several assignments in New York Province apostolates: One year each at St. Andrew’s and Shrub Oak’s Loyola Seminary as Spiritual Father and theology teacher (1966-68); five years at Canisius High School in Buffalo teaching physics and theology with a stint as dean of discipline (1968-73); two years giving retreats at Christ the King Retreat House, in Syracuse, N.Y. (1973-75); two years teaching theology and Scripture at Saints Peter and Paul Seminary in Ibadan, Nigeria (1975-77); and then four years at McQuaid Jesuit in Rochester, N.Y., teaching physics and math (1977-81).

Fr. McDonough’s next assignment was to Notre Dame High School in Elmira, N.Y., where for 30 years (1981-2011) he endeared himself to several generations of students, alumni, parents, and the Sisters of Mercy, as Chaplain at both the convent and school, and a teacher of math, Latin and theology. Ego Sum Lux Mundi (I Am the Light of the World) is the school motto. For a third of his life Fr. McDonough was very much a light in the world of all those at Notre Dame High School.

In 2011, Fr. McDonough retired from Notre Dame and moved to live in the small Jesuit community in Rochester, N.Y., where he tutored students from McQuaid Jesuit. After six years there (2011-17), and with aging bones and weakening knees, Fr. McDonough made his last move, this time to the Jesuit Health care residence at Murray-Weigel Hall in the Bronx. There, with his gentle presence, comfortable conversation, and his thoughtful and heartfelt homilies at Mass, he continued to be a light, now in the everyday world of his Jesuit brothers to whom he had easily endeared himself. On January 18, 2023, after a prolonged bout with COVID-19, Fr. McDonough died as he lived, peacefully in the Lord, at the age of 93.

JESUITS Magazine: Winter 2023
Jan. 18, 2023 - The Winter 2023 issue of JESUITS magazine is now available to read online. Highlights include a recap of Jesuit Fr. General Sosa’s visit to the United States, an overview of life in the Jesuit novitiate, and much more.
News
Remembering Jesuit Father Joseph J. Feeney
Remembering Jesuit Father Joseph J. Feeney
News, News Story, Story
St. Michael’s Community in Buffalo Perseveres Through Blizzard
Jan. 5, 2023 - Fr. Fred Betti, SJ, associate pastor at St. Michael’s Church in Buffalo and chaplain of the Response to Love Center, has shared a reflection about how the people of St. Michael’s came together during the recent blizzard.
News