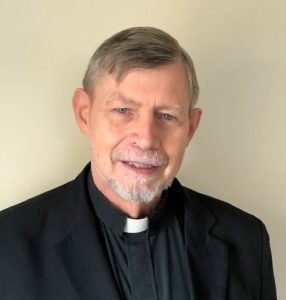 He attended Saint Peter’s Prep in Jersey City and when he graduated in 1966, he entered the Society of Jesus at St. Andrew on Hudson, Poughkeepsie, N.Y. He would go on to receive his bachelor’s degree at Fordham University from 1968 to 1972.

In 1972, he spent two years as an English teacher at Xavier High School, Chuuk in Micronesia. In 1974, he returned to the United States to complete his Theology at Jesuit School of Theology Chicago.

After finishing his Theology in 1979, he spent a year at Loyola Jesuit Center in Morristown, N.J. giving the spiritual exercises. After that, he spent a year teaching at Canisius High School in Buffalo, N.Y. In 1981, he traveled to Xavier Micronesia again to teach and serve as school director. He did this for three years.

From Sept. 1984 to March 1985, he completed his tertianship in Manila in the Philippines. He then spent two years studying Canon Law at St. Paul University, Ottawa, Ontario.

From 1987 to 2006, Fr. Rakowicz served the Diocese of the Caroline Islands in varying capacities. These roles included Judicial Vicar, Pastoral Minister and socius. After his almost 20 years in the Caroline Islands, he returned to the United States and spent a year doing Pastoral ministry at St. Ignatius Loyola in New York City.

In 2007, he would return to Loyola House of Retreats in Morristown, N.J., and stay there for the next ten years. While there he initially worked as a Retreat and Pastoral Minister but eventually also took on the role of Vice Superior.

In 2017 he would return to Micronesia for another two years as the Judicial Vicar Diocese of Caroline Islands. In August 2019, he took on the role of spiritual director at Loyola on the Potomac Retreat House in Faulkner, Md.