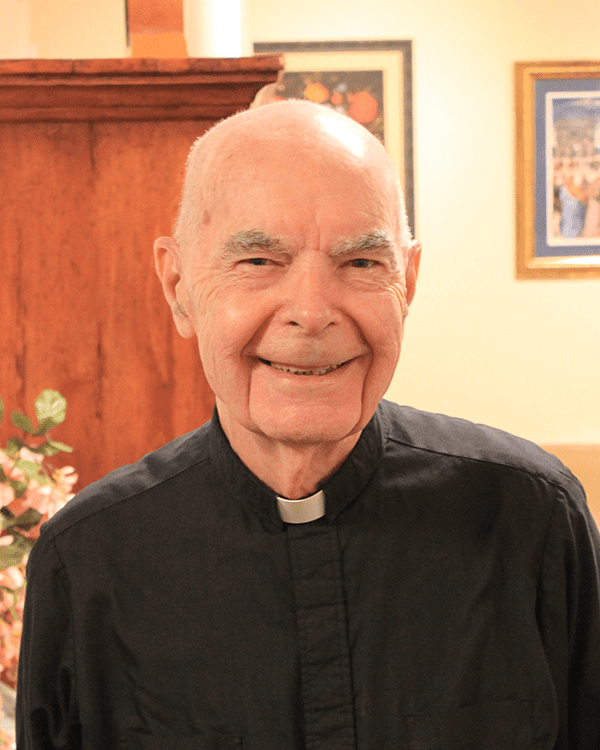 After college, Fr. Walsh served in the United States Army before entering the Society of Jesus as a novice at St. Andrew-on-Hudson on Feb. 1, 1957. After first vows in 1959 he went to Fordham’s College of Philosophy and Letters at Loyola Seminary in Shrub Oak, N.Y, and there earned his Licentiate in Philosophy in 1961. That year Fr. Walsh went to Xavier High School to begin his three-year regency where he taught Mathematics and otherwise threw himself into all the other tasks which regents are usually given to carry out (1961-1964). During regency, he managed as well to earn an M.A. in Teaching at Fordham (1963).

Following regency, Fr. Walsh studied Theology for the usual four years at Woodstock College in Maryland (1964-1968), receiving his Master of Divinity degree in 1968. He was ordained to the priesthood on June 15, 1967, in the Fordham University Church by the then New York Coadjutor Archbishop John Maguire.

Although he truly remained a life-long student of theology, when he finished the Society’s formal course of theological studies at Woodstock, Fr. Walsh traveled to the University of Michigan to study Political Science (1968-1974). Then, after teaching Political Science at Le Moyne College, Syracuse, N.Y., for three years (1974-1977), he returned for a final year of Doctoral Studies at the University of Michigan at Ann Arbor.

Beginning in the Fall of 1978, Fr. Walsh did his tertianship with Fr. Joseph Neville, SJ, while living at the Le Moyne Jesuit Community in Syracuse, N.Y. He stayed on at Le Moyne College working in Campus Ministry and lecturing in Political Science (1978-1989).

After a brief stay at Murray-Weigel Hall as assistant to the Superior in 1989, Fr. Walsh was assigned to the Martyrs’ Shrine at Auriesville, N.Y., where he served as Superior and as Director of the Retreat House there (1989-1995). From 1996 to 1998 Bill was Superior and Director at the Loyola House of Retreats in Morristown, N.J

However, he soon moved on to begin a fifteen-year term of service at Inisfada, that is, St. Ignatius Retreat House in Manhasset, N.Y., as a retreat and pastoral minister (1998-2013). During this time, he served as minister to the Jesuit Community for a year (1998-99) and got a year off for a well-deserved sabbatical (2005-06). In 1999, Fr. Walsh moved with the retreat house community to their new residence in Westbury, N.Y., from where they continued their ministry at St. Ignatius Retreat House. At this new community residence, Fr. Walsh served as Vice-Superior and Treasurer during his last two years there (2011-13). In mid-2013, Fr. Walsh moved to St. Anthony’s Parish in Oceanside, N.Y., for three years of parish ministry (2013-16).

Fr. Walsh had a big heart, and when he smiled it was a big smile. He was a quiet man who could surprise you with his sense of humor. He was also a man who had a deep spirituality and love of his Lord. In 2016, at the age of 84 and because of declining health, Fr. Walsh moved to the Province health care facility at Murray-Weigel Hall in the Bronx. His assignment for the last six years of his life was to pray for the Church and the Society of Jesus. We trust that we will continue to feel the effects of his prayer for us now that he experiences the complete joy of his companionship with Jesus. May he rest now in quiet and joyful peace.