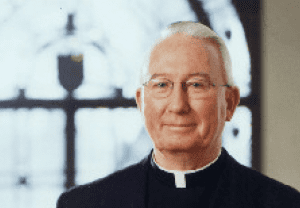 April 6, 2020 — Jesuit Father Joseph A. O’Hare, who served America magazine as its editor in chief from 1975 to 1984 and transformed Fordham University as its president, died on March 29, 2020, at Murray-Weigel Hall in the Bronx, New York, after a long illness. He was 89 years old.

He returned to the United States to study theology at Woodstock College in Maryland and was ordained to the priesthood on June 17, 1961. In 1962, he did his tertianship year in Drogen, Belgium.

After completing tertianship, Fr. O’Hare came back to the United States to begin graduate studies in philosophy at Fordham University (1963-1968); this included a year of studies at the Sorbonne University in Paris. Having completed his doctorate, he returned to the Philippines to teach philosophy at the Ateneo de Manila and the Loyola House of Studies (1968-1972).

Fr. O’Hare returned to the United States in 1972 to begin his career at America magazine, first as a writer and assistant editor, and then in 1975 as editor. In 1980, in addition to being editor of America magazine, he became superior of the community at America House.

Fr. O’Hare was also a hard-working public servant. He was appointed by New York Mayor Edward I. Koch to the Mayor’s Committee on Appointments and to the Charter Revision Committee. In 1988, he became the first chairman of the city’s Campaign Finance Board and was re-appointed chair by Mayor Rudolph Giuliani twice, serving on the board until 2003.

In 2012, Fr. O’Hare moved to Murray-Weigel for health reasons with the assignment to pray for the church and the Society of Jesus. He livened the community with his wit, his stories and his illustrious visitors, among whom was Supreme Court Justice Sonia Sotomayor, who called Fr. O’Hare “one of my heroes.” May he now rest in peace with the Lord whom he served so well. [Sources: Jesuits East, America]