The Beatification of Fr. Rutilio Grande, SJ, a Prophet Like John the Baptist

There’s a photo of an El Salvadoran Jesuit that hangs just outside our community chapel in Belize City. The man in the photo isn’t smiling. His appearance suggests someone else requested, or required, this portrait photo. Even so, I like to look at it — his face lacks any hint of pretentiousness. It’s honest and humble. And it’s caused me to refer to our community prayer space as the “Rutilio Grande Chapel.” It’s his photo hanging there at the chapel entrance.

Like most American Catholics, I had no idea who Rutilio was when I was growing up. I’d only heard his name and seen a portrayal of him in the 1989 biographic film “Romero.” Virtually every Catholic (and many non-Catholics) know about St. Oscar Romero’s heroic witness as archbishop of El Salvador, but few are very familiar with the story of Rutilio Grande, the archbishop’s friend and fellow martyr.

The film portrays well enough that Rutilio’s death acted as a catalyst for the conversion of Romero. But it wasn’t until a couple years after I entered the Jesuits that I took the time to learn more about this prophetic and saintly man. In so doing, I couldn’t help but notice an analogous parallel between his relationship with St. Oscar Romero and St. John the Baptist’s relationship with Jesus Christ.

First, John the Baptist and Jesus were cousins and undoubtedly knew each other. They were conceivably close prior to their public ministries. Similarly, Rutilio and Romero were friends prior to engaging in the ministries that led them to their respective martyrdoms. They met before Romero was named archbishop when both worked at the local seminary in San Salvador. Evidence of their friendship is provided by Romero himself when he said in the homily at Rutilio’s funeral mass, “At very critical moments in my life he was very close to me, and I will never forget his gestures of friendship.”

Second, John the Baptist situated himself in the wilderness away from the cultural and religious center of Jerusalem, at the margins of society. He called people to repentance and proclaimed, “the kingdom of heaven is at hand.” John made himself poor in order to draw people to God.

Rutilio, too, placed himself on the margins and called people to conversion. In 1972, Rutilio took a team of Jesuits to a rural village called Aguilares, where he began to build a pastoral model by establishing base ecclesial communities. In a report written by Rutilio, he reported the motivations of his team: “In light of the concentration of clergy among the urban minorities [the wealthy of San Salvador], it seemed urgent to insert us into the marginalized majorities.”

Both Rutilio and St. John the Baptist recognized that proximity to wealth and power is a corrosive force on the good. In order to proclaim the Reign of God, they needed to be close to the poor.

Most importantly, both St. John the Baptist and Rutilio Grande actively stood against the systems of oppression of their day and inspired Jesus and Oscar Romero to do the same. The death of both John and Rutilio marked the beginning of the respective three-year ministries of Jesus and Romero.

In El Salvador, the system of oppression was tied to the land. Much of the arable land in El Salvador, as well as much of Central America, was controlled by big agricultural companies. This meant that campesinos, or those whose lives depended on subsistence farming, were deprived of opportunities to provide for their families. Therefore, these communities, empowered by the Gospel, became more vocal in calling for national land reform. That was not a welcome development in the eyes of wealthy landowners. Just as John the Baptist denounced the injustices of the powerful, Rutilio denounced those who made themselves rich at the expense of the poor.

John’s arrest came after he denounced the marriage of King Herod to his sister-in-law, Herodias. Outraged that John would dare speak against the elite, Herodias arranged his beheading. Simply put, it was an extrajudicial killing, and it came at the beginning of Jesus’s own public ministry.

Rutilio’s death was a consequence of his ministry with the base ecclesial communities in Aguilares. He invited people to see themselves as the protagonists of their stories. They were not powerless in the face of destiny. Rather, they were capable of bringing about the change they wished to see — they could work to bring about God’s reign in their hearts and in their communities. Rutilio taught people how to reflect on their experience in light of the Gospel, and he urged them to take actions to live out that same Gospel. They began to recognize their dignity and see that God didn’t want them to live in abject material poverty.

On March 12, 1977, Rutilio Grande was murdered alongside an elderly man, Manuel Solorzano, and a teenage boy, Nelson Lemus. When Archbishop Romero learned of the death of his friend, it awakened him to the reality of his fellow Salvadorans. Archbishop Rivera y Damas, Romero’s successor, said this: “One martyr gave life to another martyr.”

Similar to the way Jesus’ ministry entered a new phase after the beheading of John the Baptist, Romero’s march to martyrdom effectively began with the death of his friend Rutilio. A week after his death, Romero invited the entire archdiocese to celebrate a single Mass throughout the country. The only Mass to take place that Sunday was at the cathedral in San Salvador. This was a deft move that insured Rutilio’s death, and the plight of the people Rutilio died serving, could no longer be ignored.

Another photo hangs just inside our community chapel in the exact spot Rutilio’s photo hangs on the outside. It’s a photo of Monseñor Romero. And even though Romero, the canonized of the two, hangs on the inside, I still prefer to call it Rutilio Grande Chapel. I believe in order to fully understand Romero’s life and mission, we need to confront the witness of Rutilio’s life. We need to enter Romero’s life through the person that inspired and formed him: Rutilio Grande. That’s why I celebrated the Vatican’s announcement that Grande, along with three other El Salvadoran martyrs, will be beatified on January 22. This man who was a sign to Romero’s life and ministry is now being proclaimed a sign of God’s goodness to all people. 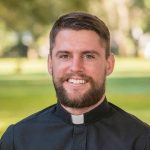 Ian Peoples, SJ, is a Jesuit regent serving as a prison chaplain to incarcerated youth in Belize.