Dec. 22, 2021 – While the coronavirus has continued to present challenges for much of this past year, there were still instances of joy and hope. This is especially true in our province as we saw men respond to their vocations and continue their formation in the Society of Jesus. We have gathered some of the top Jesuit stories from the past 12 months to share with you.

Although there was so much that made this year’s presidential inauguration Joe Biden unlike any other, traditions and established practices prevailed. The ceremony opened with Fr. Leo O’Donovan, SJ, delivering the invocation prayer for the incoming administration. Fr. O’Donovan prayed for a renewal of the vision to care for one another in both word and deed, especially the least fortunate among us.

Responsibilities of Women in Society of Jesus 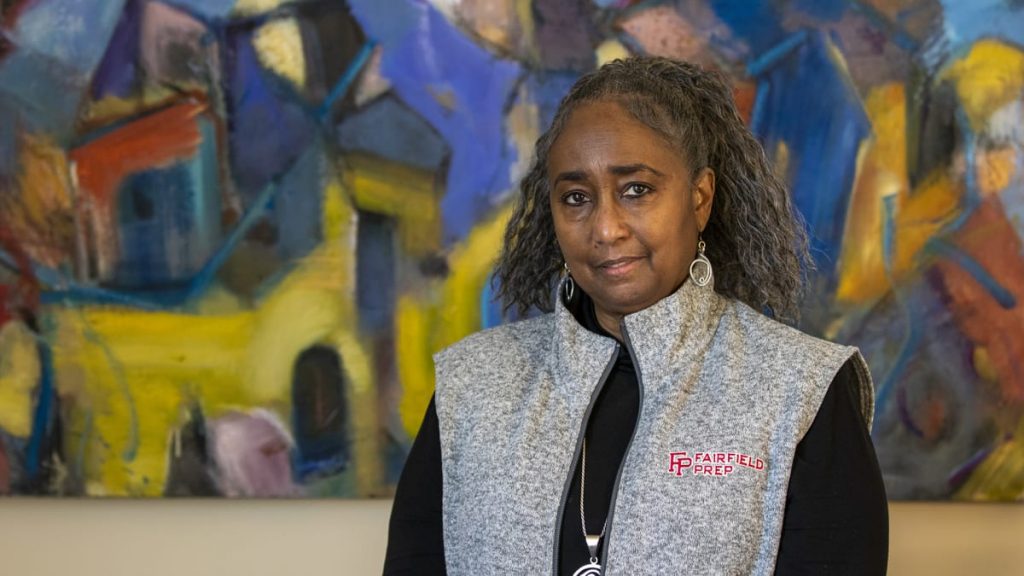 On March 8 — International Women’s Day — Father General Arturo Sosa, SJ, announced the creation of the Commission on the Role and Responsibilities of Women in the Society of Jesus, the next step in the Society’s efforts to more fully include and collaborate with women. Dr. Donna M. Andrade, Dean of Mission and Ministry at Fairfield Prep was among those named to the commission. She was the only woman from the Jesuit Conference of Canada and the United States to be selected as a member of the Commission.

May 20, 2021, marked the 500th anniversary of St. Ignatius’ conversion — that fateful day when Ignatius the soldier, struck by a cannonball, began his transformation into Ignatius the pilgrim. The Society of Jesus will be celebrating an Ignatian Year until July 2022. Jesuit works throughout the world (including the province) are  planning events and programming to celebrate this anniversary.

Last May, more than 700 households joined the USA East Province for a Virtual Celebration to kick-off the Ignatian Year, to honor our Senior Jesuits, and to present the Ad Majorem Dei Gloriam Award to Dr. Anthony Fauci and his wife, Dr. Christine Grady. The event was hosted by Provincial Fr. Joseph O’Keefe, SJ, and Emcee, Brendan Coffey, SJ. Highlighted were interview clips and appearances from many of our USA East senior Jesuits and staff members from Campion Center, Murray Weigel Hall, Manresa Hall and Colombiére Jesuit communities. 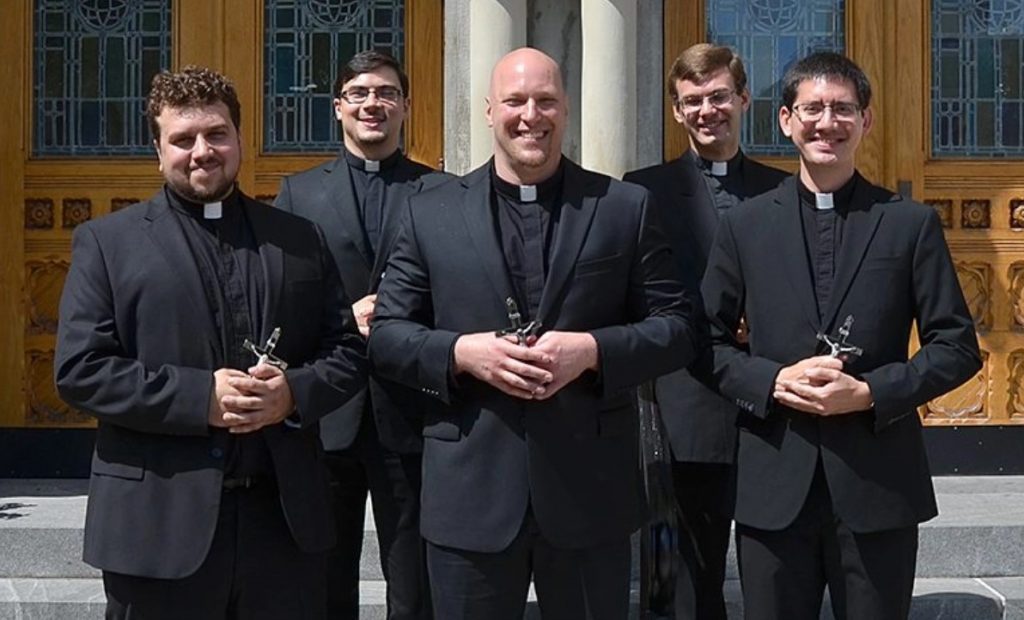 Last August, five Jesuit Novices of the USA East Province pronounced first vows on Aug. 14 at the Cathedral of the Immaculate Conception in Syracuse, N.Y. Back row: Christian Zombek, SJ, and Luke Lapean, SJ. Front row: Mario Verde, SJ, Robert Lorenz, SJ, and Ronald Jacobs, SJ. They now continue in their formation as brothers in Christ, companions in the Society of Jesus. Nicholas Leeper, SJ, (right) studying at St. Louis University, professed his first vows on Dec. 10, at the Bellarmine House of Studies in St. Louis. 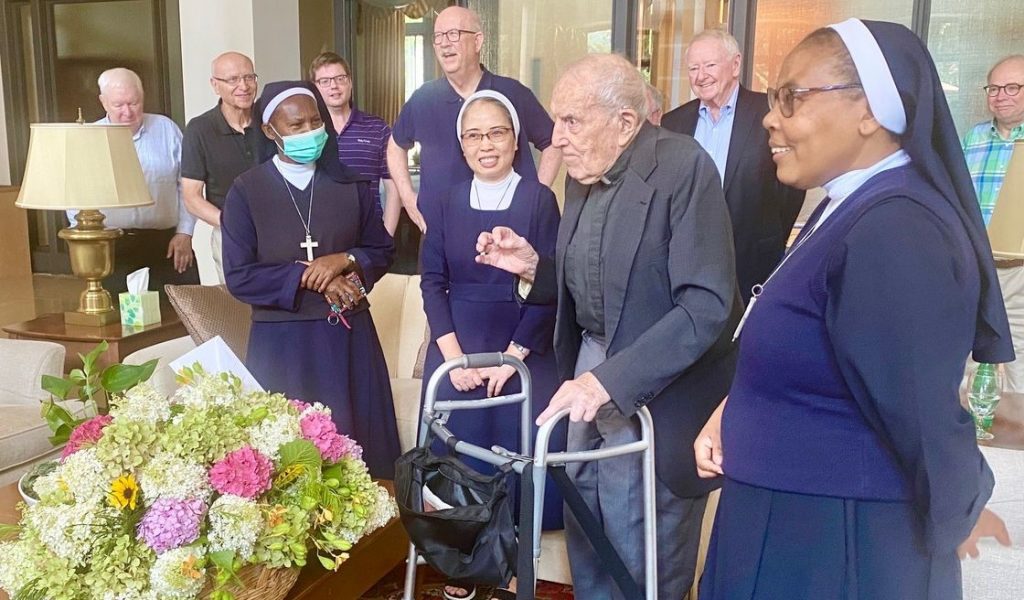 It’s not every year that a Jesuit in the province becomes a centenarian! On July 30, Fr. Les Orsy, SJ, former Law professor at Georgetown University and author of nine books, celebrated his 100th birthday. He is seen here with some Sisters from the Visitation Academy who brought him an arrangement of flowers from their garden. Here’s to next year, Fr. Orsy!

2021 marked the 50th anniversary of eight USA East Jesuits in the Society of Jesus. Pictured above are Jesuit Fathers (top) Thomas Clark, James Conroy, William Dolan, and Thomas Gaunt; (bottom) John Levko, Thomas McCoog, Joseph Rossi, and James Shaughnessy, who all entered the Society of Jesus in1971. There are also more than 70 Jesuits of the province who celebrate other Jubilee years in the Society or the priesthood.

Last September during the Mass of the Holy Spirit, Fr. A.J. Rizzo, SJ, was officially installed as the 10th president of Scranton Prep. Prior to this, Fr. Rizzo most recently served at Regis High School in New York City as director of Mission and Identity. As a regent, he taught English, theology and Latin at Scranton Prep. He is also an alumnus of the University of Scranton.

The 2021 Friends of the Jesuits Golf Outing 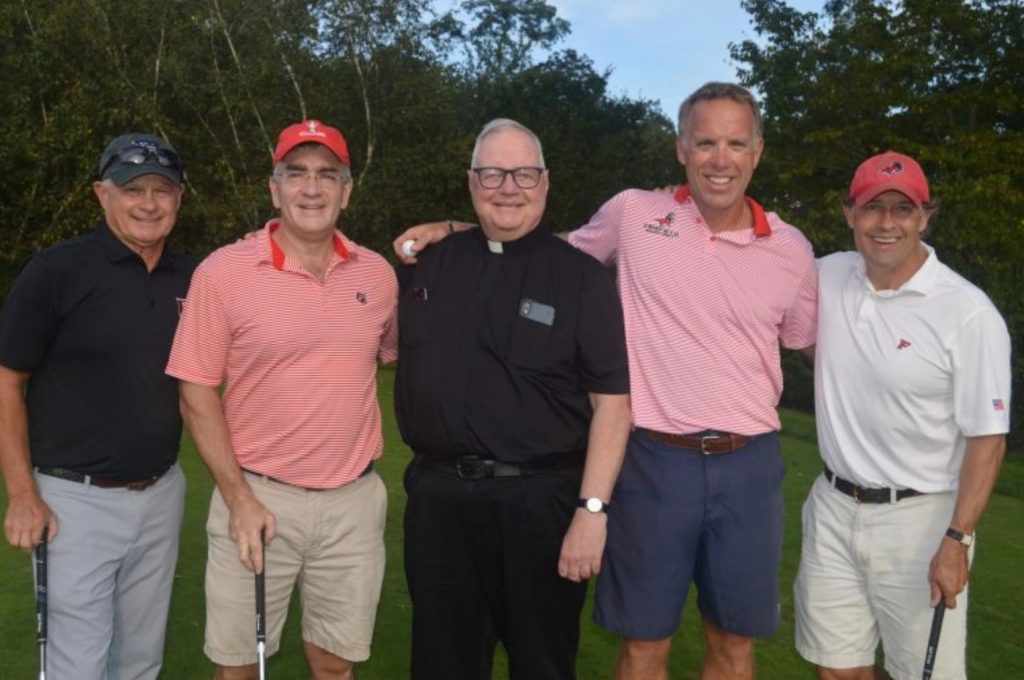 On Tues., Sept. 21, 2021, nearly 100 golfers and supporters attended the 2021 Friends of the Jesuits Golf Outing at the beautiful Quaker Ridge Golf Club in Scarsdale, N.Y. For more than a decade, the Friends of the Jesuits Golf Outing has raised funds to support men in formation as well as senior Jesuits. Despite last year’s outing being canceled due to the Covid-19 pandemic, these events have collectively raised more than $3 million for the province. Nearly 1,500 people, including representatives from more than 45 colleges and universities, attended the inauguration of The University of Scranton’s 29th president, Fr. Joseph Marina, SJ, on Sept. 24, 2021. USA East Provincial Fr. Joseph O’Keefe, SJ, was in attendance to present the Missioning of the President during the ceremony. 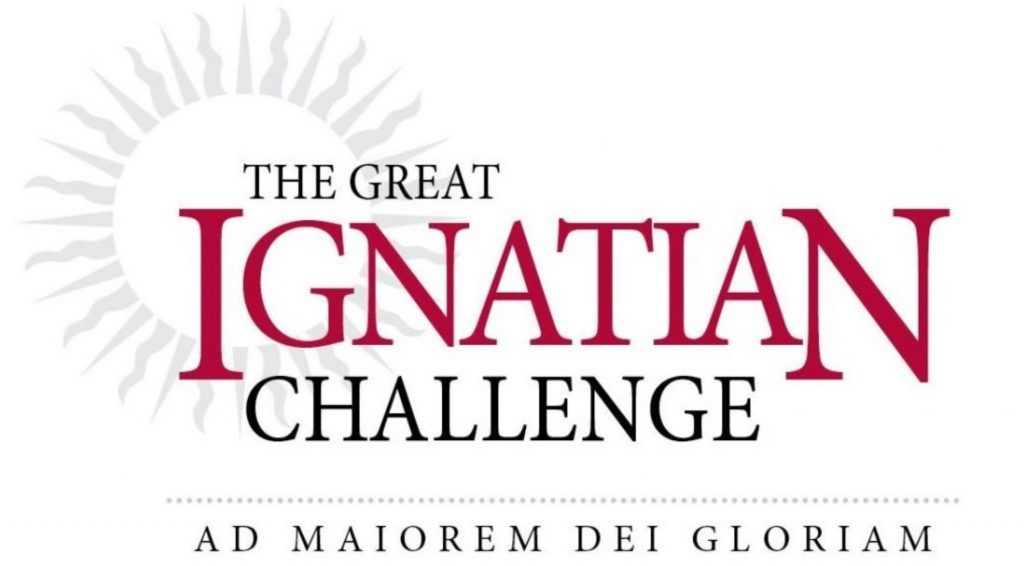 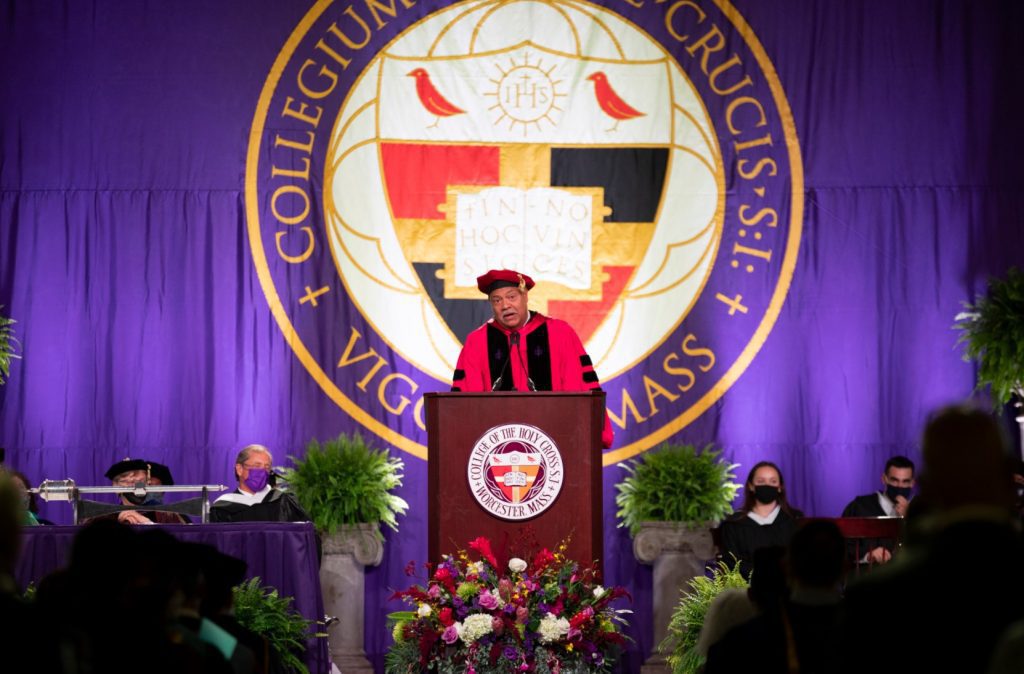 On Oct. 22, Vincent D. Rougeau was installed as College of the Holy Cross’ 33rd president – the first lay and first Black president to lead the 178-year-old institution– in a ceremony punctuated by inspirational words and feelings of excitement and hopefulness. The installation, held in the Hart Center at the Luth Athletic Complex, put the ceremonial stamp on a tenure that began July 1 when Rougeau took over from his predecessor, Fr. Philip Boroughs, SJ, who was also in attendance. 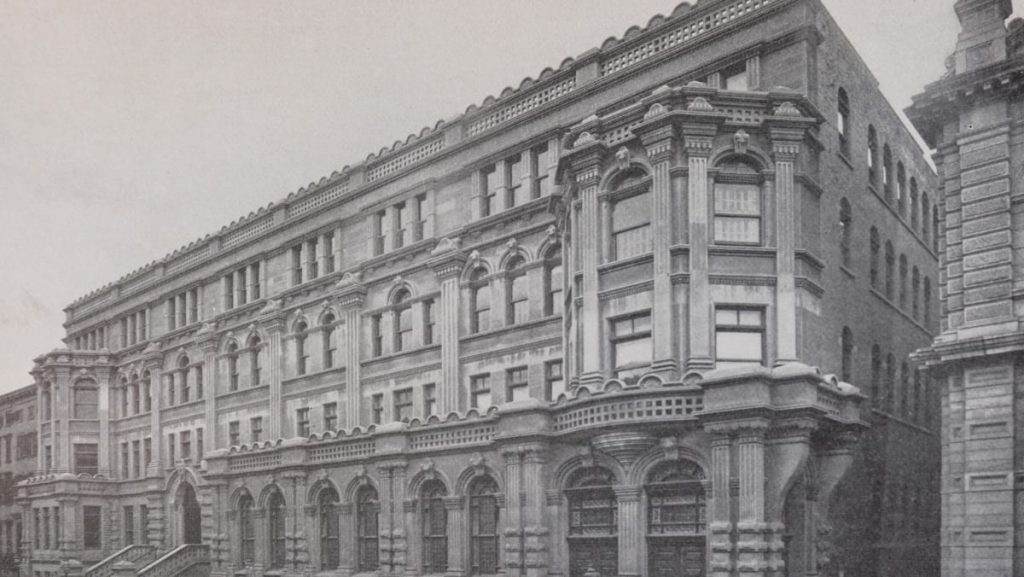 On Fri., Dec. 3, the Feast of St. Francis Xavier, the Xavier High School community celebrated the official opening of its 175th anniversary year. Students, faculty, staff, alumni, parents, trustees, and other guests celebrated both the feast of its patron and the beginning of its anniversary year with a special Mass in St. Patrick’s Cathedral. His Eminence, Timothy Cardinal Dolan was the principal celebrant, along with members of the Society of Jesus and several alumni priests. This Mass was the first in a series of special events marking its 175th anniversary. Xavier will share information about additional 175th anniversary events soon and feature them on its anniversary microsite.